See the slideshow in native flickr format. (I recommend checking it out in Flickr because everything is labeled and the embedded slideshows leave a lot to be desired.) Back in 2011, I somehow talked my mom into taking a trip that included the Creation Museum. I remember reading about it during the opening in 2007, and hearing that some pretty prominent theme park designers worked on the exhibits. I’m very interested in how information is presented, physically. The Creation Museum is all about “answers.” The overlord organization is actually called “Answers in Genesis” and I have to think it’s because it’s so easy to poke holes in the literal accuracy of the bible simply by raising questions. This place provides the “answers” to those pesky questions.

(If slideshow doesn’t load, you may need to refresh the page, or just view in a new window)

In other words, The Creation Museum is a place where creationist people can go to learn how to better argue with sane people.

It’s not a “museum” in the sense of displaying historical artifacts or works of art. Instead, the exhibits are designed to show you what something looked like. Literally. There are so many rooms in there where the designers just took a phrase and literally turned into three-dimensional reality. (My favorite is the life size “millions of years” wrecking ball pummeling the side of a church. The tableau illustrates the museum’s assertion that the very idea that the earth is more than a few thousand years old means that everything else about the church’s teaching will be invalidated.) There is no metaphor here. Instead of trying explore the actual meaning behind, say, the great flood, we get a bunch of mannequins demonstrating the building and engineering techniques of biblical times. Because there is no symbolism here. There’s only “what actually happened” aka “the answers.” If you can see it in front of you, it must be the truth. It’s actually an argument against value of faith, in a way.

Although the designers of the Creation Museum believe that everything in the bible is the literal truth, they don’t really possess any objects to prove it.  There aren’t any shrouds or slivers of wood from the cross. It may sound odd, but there’s not a whole lot of Jesus or even traditional religious symbolism in the building. Rather, the whole place is based on an argument (the book of Genesis IS the story of how the earth was formed) and all of the “scientific evidence” flows from there. Because there aren’t any traditional artifacts, most of the “scientific evidence” is provided in the form of bullet points and long paragraphs of text. Never have I had to actually READ so much in a museum. Seriously. Paragraph after awful paragraph of nonsense.

That said, it has all the visual cues of a museum: glass cases, placards, dioramas, dramatic lighting. The language doesn’t sound all that different from a natural history museum and the messaging is, well…on brand. Some sections are more laughable than others, but the place twists itself in knots to avoid using “God is magic” as one of their “answers.” For example, to “answer” the question of how different kinds of animals ended up in locations all over the world after the flood (remember, there were only two of each), the Creation Museum doesn’t simply offer that “God intervened,” which would probably just be the simplest explanation. Nope, they claim that animals climbed aboard logs to “raft” to other continents (hat tip to Rationality Now for this priceless photo). Just think about that one for five seconds.  There’s something weirdly noble about clinging so desperately to the idea that Genesis can be backed up with something resembling science. I can only imagine the brainstorming sessions over at Answers in Genesis Inc. 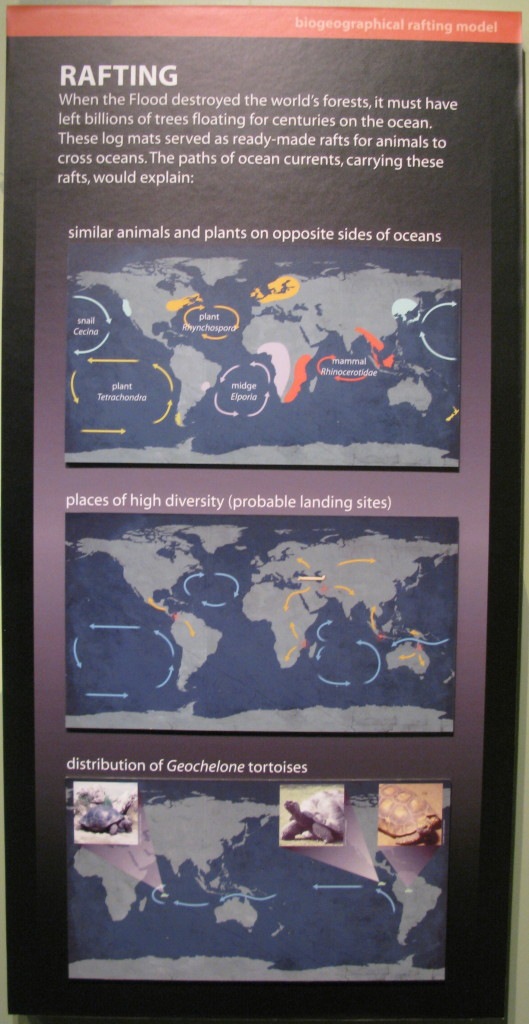 It’s a lavish propaganda hut masquerading as a museum. All museums have messages, some more subtle than others. But this one has actual talking points which get reiterated in a truly bizarre movie/audio-animatronic presentation called Men in White. If you missed the points that the museum text drilled home again and again (“different starting points,” “natural selection is not evolution,” “dinosaurs were vegetarians”), this “comedic” film helpfully provides them to you so that you’re armed with non-logic next time a rational person tries to engage with you.

There’s also a planetarium, which I insisted on seeing because I love planetariums and space. Unfortunately, it was more like a normal projector on a domed ceiling, but I did find it to be the sanest part of the museum, if you just ignore the idea that God also created all of space 6000 years ago.

Overall, the part of the experience that most stuck with me was how foreign and isolated I felt. I wonder if that’s how a creationist feels in a natural history museum? You can only look at so many dioramas of humans and dinosaurs interacting or nonsensical pseudo-scientific explanations before you get mentally fatigued. It’s really disorienting to look around and not see anything in the vicinity that makes sense. Note: The quality of the photos isn’t great, mostly because of the dramatic lighting, the fact that I was using a point and shoot, and that I didn’t want to be too obvious in my photo-taking.